Voted as one of Top 10 Favorite Small towns to visit in America! Come See why and visit downtown Phoenicia!

Kaaterskill Falls is a two-drop waterfall. The dual cascades total 260 feet, making it one of the Eastern United States' tallest waterfalls.

New York Zipline Adventures offers incredible outdoor adventure tours ranging from 'mild' family-oriented outings to a 'wild' adventurous experiences and everything in between!

Come and experience an 18 hole mini-Golf, take a swing at the driving range, roam among the scenic trails on horseback, even enjoy a round of paint ball.

10 Minutes Away! Walk the streets of this beautiful town, shop in stores, flea markets, or enjoy the drumming circle in town square!

10 Minutes Away! Spend less time planning and more time having fun! Located in the Catskill Mountains, Belleayre is surrounded by charming villages and hamlets.

10 Minutes Away! Hunter Mountain’s fun continues after the snow melts with activities all spring, summer, and fall! Enjoy world-class entertainment at one of our numerous festivals and concerts 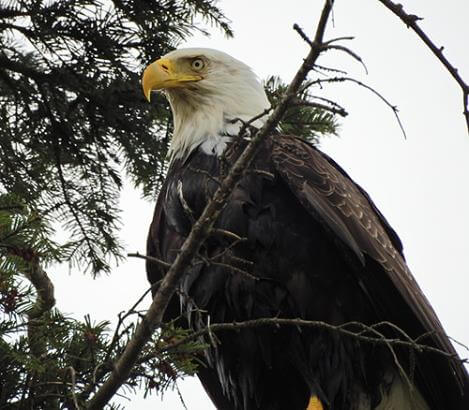 Bald Eagle The bald eagle was adopted as the symbol of the United States because of its independence and strength. One of the largest birds of prey (raptors) found in North America, bald eagles stand about 30 inches high, sport a wingspan of 72-84 inches, and weigh between 8 and 14 pounds.

This majestic bird is easily identified in adult plumage by its unmistakable brown body set off by a white head and tail and bright yellow bill. Male and female eagles look identical, except that the female is usually about one third larger and heavier than the male. Sexual maturity and the characteristic white head and tail are achieved at five years of age. The word *Bald*in the eagle's name comes from a word in Old English that means white headed.

Life History
The bald eagle is a long-lived bird, with a life span in the wild of more than 30 years. Bald eagles mate for life, returning to nest in the general area (within 250 miles) from which they fledged. Once a pair selects a nesting territory, they use it for the rest of their lives.

Eaglets on their nest Bald eagles produce only one or two offspring per year, rarely three. In New York, the young fledge by mid to late summer at about 12 weeks of age. By 20 weeks they are largely independent. A bald eagle nest is a large structure, usually located high in a tall, live white pine tree near water. The nest is reused and added to each year, often becoming eight or more feet deep, six feet across, and weighing hundreds of pounds.

The Trout Of New York For many years, these strong, streamlined, colorful fish have been among the most popular game fish in New York State. Their beauty and fighting ability attracts the skilled, as well as the novice, angler.

The DEC annually stocks millions of these fish into waters across New York State to provide anglers with additional trout fishing opportunity. Several private groups have been formed by citizens committed to protecting trout habitat.

Trout live in a variety of habitats, ranging from small mountain streams to the enormous Great Lakes. They require cool, clean water to survive and are often the first species to disappear from polluted waters. Similar to salmon, trout are fairly primitive fish, with small scales and soft-rayed fins. Their lower ventral or pelvic fins are set well back on the body and a small lobe-shaped fin sits behind the single dorsal back fin.

Trout are highly variable in color. In streams, they have spots or wavy lines over backgrounds ranging from dark olive to light brown. In large lakes, they are often silvery. Trout also vary a great deal in size. Two - five pounds for a stream brook trout.

Spawning Rainbow trout spawn or reproduce in the spring, while New York's other trout spawn in the fall. Like salmon, most trout species build nests. Using their tails to fan the bottom, female trout create a depression in clean gravel or cobble sites in streams and, occasionally, in seepage areas in ponds. The males remain nearby and drive off rivals. When the nest is ready, the eggs are deposited, quickly fertilized, and covered under a layer of gravel. Both adults then move on, leaving the eggs and young to develop on their own.

Trout eggs are larger and fewer in number than those of many other fish species. For example, while a mature female walleye may have 50,000 to 100,000 eggs, a mature female trout may only have 1,000 to 3,000 eggs. After the trout eggs hatch, the young fish remain in the gravel for about one week before emerging to feed.

An interesting fact is that although rainbow trout spawn later than other New York trout species, their eggs still hatch at about the same time in the spring. This is because the amount of time required for fish eggs to develop depends on the water temperature. Eggs develop faster in warm water than in cool water. Therefore, the eggs deposited in the fall take longer to hatch - as they develop over the winter - than those deposited in the early spring, allowing the eggs of each species to hatch at a similar time.